Flash 2 votes
We're looking for a Catwoman guide worthy of being our Editor's Pick. Want to see your guide here, prominently displayed to every visitor to this page? Go create a guide and show us what you can do!
Default
The below feature is still being tested. Expect bugs and wacky behavior.
Vote for who Catwoman is strong and weak against. This will be particularly useful once draft/ranked matches are available.

Catwoman's Teleport has a reduced Cooldown.

Target an allied Turret, Drone, Surveillance Camera or Control Point with no contesting enemy Champions, and blinks to it after 4 seconds. Cooldown is reduced if teleporting to a Turret or control point.

Catwoman rushes in target direction, and the next skill used within 5s is improved:

Whip Strike: 10% extra damage, and half damage in an area around the target.
Cat's Paw: Knock Down the target for 0.5s.

In addition, Acrobat's cooldown is reset and it becomes Savage Acrobat, which deals 40 Power Damage to enemies she rushes through, has a cooldown of 2s, and costs half as much Will.

Trigger (Cooldown: 12s) - When Catwoman damages an enemy a coin worth 5 credits is created, which can be collected by anyone on her team. 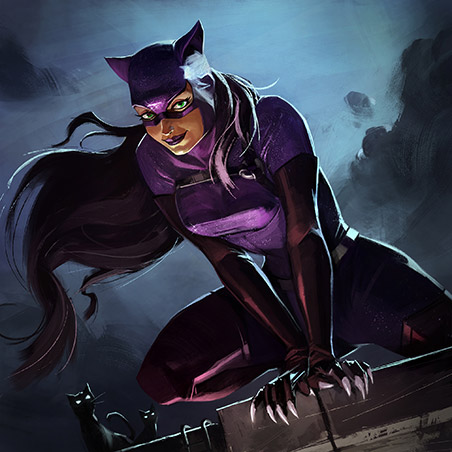 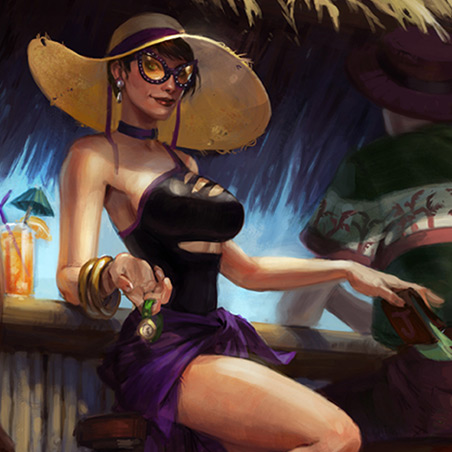 Selina Kyle's young life was marred by tragedy. Her mother took her own life, while her violent father drank himself to death soon after. Being remanded to an abusive state home, Selina escaped and took her chances on the streets. She soon fell into petty theft and eventually became a talented master thief. However, in recent years she has reformed and now fights crime. It was through her crimes that she first encountered the Batman and although they were enemies they soon both discovered that they had an attraction toward each other. Due to their complicated situation, neither party has ever fully committed to having a romantic relationship.

Years of training have made her stealthy and agile as a world-class criminal, and her mastery of the martial arts makes her a formidable physical opponent. She also frequently wields a whip, which she uses both as a weapon and as a grappling hook.