Robin 2 votes
We're looking for a Cyborg guide worthy of being our Editor's Pick. Want to see your guide here, prominently displayed to every visitor to this page? Go create a guide and show us what you can do!
Default
The below feature is still being tested. Expect bugs and wacky behavior.
Vote for who Cyborg is strong and weak against. This will be particularly useful once draft/ranked matches are available.

Target an allied Turret, Drone, Surveillance Camera or Control Point with no contesting enemy Champions, and blinks to it after 2.5 seconds. Cooldown is reduced if teleporting to a Turret or control point.

Cyborg fires a burst of energy. It deals 35 Attack Damage and marks every enemy hit for 5 seconds.

Nearby enemies are Knocked Back.

While this skill is active, Basic Attacks against marked targets increase the duration of Cascade by 1s, up to a maximum of 5s.

Cyborg fires a massive blast, dealing 125 Attack Damage to all enemies in the area, and pushing Cyborg back a short distance.

For 10s after the blast, Cyborg's Basic Attacks pierce through targets, firing their full range and damaging all enemies in the line.

Bonus damage against creatures and drones is capped at 80 Attack Damage. 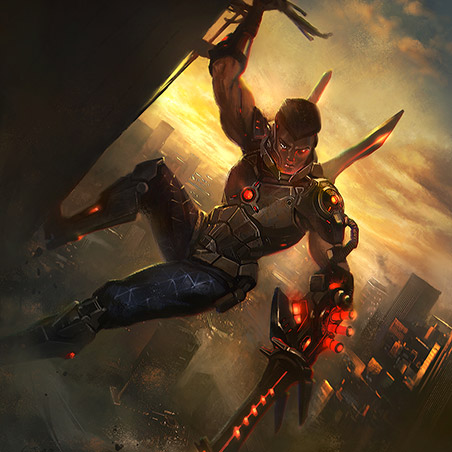 Victor 'Vic' Stone only ever wanted to please his father, a brilliant scientist who couldn't appreciate his son's impressive athletic skills. Sadly, tragedy mutilated the star quarterback and in a desperate attempt to save his son's life, his father implanted him with experiemental prosethetics. The procedure worked, but Vic quickly discovered he could not resume his old life. But the cybernetics granted him incredible abilities that quickly garnered the attention of the world's great super heroes and he finally found some solace when he joined the Justice League. After many adventures Vic seems to be finally accepting his situation and now mentors young heroes.