Lex Luthor 5 votes
We're looking for a Solomon Grundy guide worthy of being our Editor's Pick. Want to see your guide here, prominently displayed to every visitor to this page? Go create a guide and show us what you can do!
Default
The below feature is still being tested. Expect bugs and wacky behavior.
Vote for who Solomon Grundy is strong and weak against. This will be particularly useful once draft/ranked matches are available.

Solomon Grundy's Super Strength allows your Champion to pick up and throw Environmental Objects shorter but for more damage.

Solomon Grundy rushes forward, stopping at the first Champion he hits, dealing 55 Power Damage, causing them to be Knocked Back and Slowed by 15% for 1.5s.

The March: Grundy punches the target in a chosen direction, turning them into a missile, dealing 55 Power Damage to enemies they pass through.

Solomon Grundy crushes the ground, dealing 40 Power Damage to enemies in the area.

The March: Grundy launches his target skyward and then pile drives them into the ground, Knocking them down for 1s and dealing 25% additional damage.

Solomon Grundy gains 15% Move Speed for 3s. The next champion he targets with a Basic Attack becomes Suppressed for 1s and is dealt 30 Power Damage. Move Speed bonus is doubled when facing an enemy. Grundy cannot be Slowed while March is activated and any Slows on him will be removed.

Solomon Grundy oozes noxious substances for 7s. Any enemy target that is either hit by a skill of his, or comes into contact with him, will be infected for 3s. Affected targets take 1% of their Max Health as Power Damage per second and infect other targets they come in contact with. Grundy heals for 0.4% of his Max Health per second, for each Champion infected.

He will stay in this state for 5s or until he is killed for good. 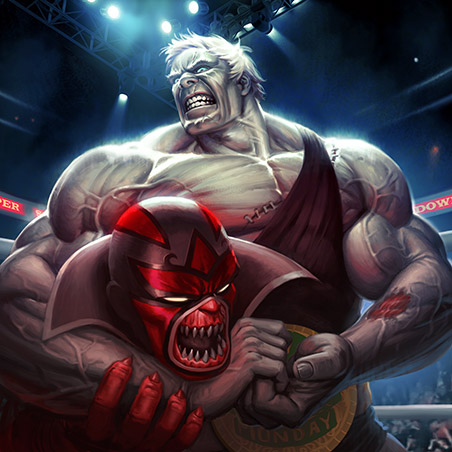 Late in the 19th century a man named Cyrus Gold was murdered and his body was dumped in the waters of the Slaughter Swamp, located near Gotham City. While rumors of sacrificial rituals being performed in the swamp by early Gothamites persist to this day, it wasn't until a nearby slaughterhouse started dumping offal into its waters that it earned the name 'Slaughter Swamp'. This history of ritual and death led to the swamp becoming a haven for the malicious elemental force called, 'The Rot'. The Rot feeds off of death and it reanimated Gold 100 years after his murder to become one of its avatars.

The shambling creature that lurched from the swamp bore almost no resemblance to Cyrus Gold nor did he possess his mind or memories. The only thing he was able to speak were lines from the 19th century English nursery rhyme, 'Solomon Grundy,' which is how he earned the name he now goes by. Since his reanimation, Grundy has been killed a number of times, only to rise again later from Slaughter Swamp. Interestingly, over successive reincarnations, Grundy has displayed varying personalities. Sometimes he has returned as a mindless brute; at other times he returned with some of the memories and intellect of Cyrus Gold and has been able to resist the Rot's directives to a degree.