Gaslight Joker 2 votes
We're looking for a Nightmare Robin guide worthy of being our Editor's Pick. Want to see your guide here, prominently displayed to every visitor to this page? Go create a guide and show us what you can do!
Default
The below feature is still being tested. Expect bugs and wacky behavior.
Vote for who Nightmare Robin is strong and weak against. This will be particularly useful once draft/ranked matches are available.

For 8s, your Champion has increased vision range, can see enemies in Stealth or in Stealth Pads, can see through walls, and gains 5% Bonus Damage.

Nightmare Robin hurls his blades in an arc. They deal 40 Attack Damage to every enemy they hit. They deal 25% less damage with each additional target, to a minimum of 25% damage. Targets in the area where the blades intersect are Knocked Down for 1s.

Reset Basic Attack cooldown. Nightmare Robin's next Basic Attack within 5s will deal an additional 40 Attack Damage and Wound the target for 3s (their healing is reduced).

Nightmare Robin blinks behind a target and gains 20% Attack Speed for 3s. When used on an enemy champion, he enters the Bloodlust state.

If used on a Knocked Down enemy, his Attack Speed bonus is doubled.

Nightmare Robin dashes to an enemy Champion, dealing 175 Attack Damage, plus 10% of the target's Missing Health as additional Attack Damage.

If this skill kills his target, he regains Health equal to 10% of the target's Max Health.

Nightmare Robin is immune to Disables while using Feed the Beast.

Bloodlust: Nightmare Robin no longer gains Damage Reduction. Instead, he gains 10 Move Speed, and Basic Attack deal an additional 5% damage when attacking from behind. Hunger decays by 10 points per second. When he reaches 0 Hunger, Bloodlust ends.

Slay your enemies as Nightmare Robin 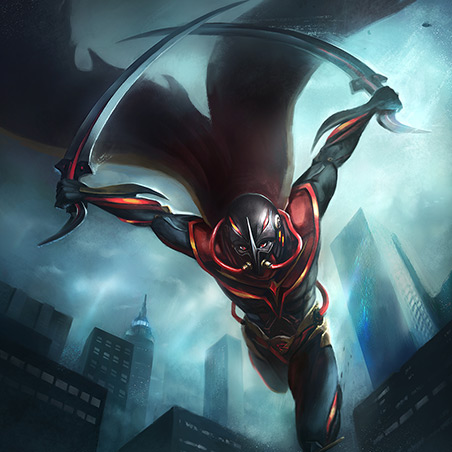 For millennia, the vampiric Ra's al Ghul has used his Guild of Assassins to manipulate the world from the shadows. Desiring his power for herself, his daughter Talia, who was also cursed with vampirism, continually struggled to depose her father. All of her efforts frustrated, she finally found the edge she needed, a man who was potent enough to challenge the Demon's Head: Bruce Wayne.

Over many years she subtly drove Batman toward her ultimate goal; the destruction of her father. However, Talia's hopes did not rest solely on the Batman. She created a child that was the union of her and Batman. She named the boy Damian, who was the perfect union of her father's vision and her love s potential. Initially, she trained him in secret, but eventually allowed him to apprentice as Robin with her estranged lover and this is where her plans were frustrated once more.

Damian witnessed Batman's final confrontation with his grandfather, and realized how deep his mother's manipulations went. Infected by his grandfather's disease, Damian watched Batman, a man he had grown to love and respect, become a ravening monster. The ashes of his father's humanity kindled a steely certainty that the blood within him could only birth monsters. A young man at war with himself, as he too feels the compulsions of the vampiric curse he gained from his mother, but is determined to scourge the filth of vampirism from the world.