Star Sapphire 2 votes
We're looking for a Swamp Thing guide worthy of being our Editor's Pick. Want to see your guide here, prominently displayed to every visitor to this page? Go create a guide and show us what you can do!
Default
The below feature is still being tested. Expect bugs and wacky behavior.
Vote for who Swamp Thing is strong and weak against. This will be particularly useful once draft/ranked matches are available.

Swamp Thing shoots a vine that deals 40 Power Damage to the first enemy it hits, and attaches itself for 3s. If it hits a target, he has 3s to cast another vine.

Summon a Husk for 300s that travels to target location and grants vision, and can withstand 1 Basic Attack. After it reaches the location, Swamp Thing can use this skill to teleport to the Husk after a 2s channel, consuming it. While channeling, the Husk gains a Shield that blocks 2 Basic Attacks. Husks are stealthed, only able to be seen by enemy Champions within 300 range.

Swamp Thing can have up to 2 charges and 2 active Husks, and generates an additional charge every 35s.

Swamp Thing becomes the Warrior King for 10s, healing 200 Health (over-healing is converted into temporary health). While he is the Warrior King, he gains 25% Attack Speed, is Immune to Slows, and his Basic Attacks deal an additional 30 Power Damage that splashes to nearby enemies.

Trigger (Cooldown: 50s) - If a single blow deals 0 damage (8% of Current Health) to Swamp Thing, he will regenerate 75% of that damage back over 4s. 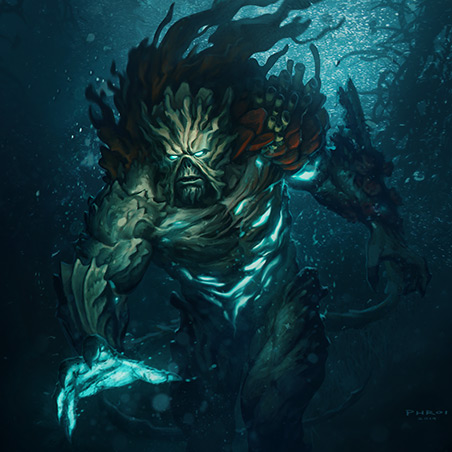 Alec Holland was a brilliant chemist who developed something he called a bio-restorative formula which promised to solve food shortages forever. Unfortunately, thugs hired by a rival who wanted to steal the formula triggered an explosion in Alec's lab, destroying it and killing Alec. The explosion caused Alec's formula to saturate the nearby plants and thus the Swamp Thing was born.

Possessing Alec's memories, the Swamp Thing initially thought he was Alec reborn and cursed the monster he had now become. However, in time he learned the truth: He was actually one in a long line of elemental protectors summoned by The Parliament of Trees. This group of sentient plants protected the Green, the force that created and sustained plant life on Earth. Swamp Thing embraced his role as protector of the Green, and thanks to the memories he inherited from Alec he has expanded his charge to the protection of all life on Earth.