Supergirl 1 votes
We're looking for a Poison Ivy guide worthy of being our Editor's Pick. Want to see your guide here, prominently displayed to every visitor to this page? Go create a guide and show us what you can do!
Default
The below feature is still being tested. Expect bugs and wacky behavior.
Vote for who Poison Ivy is strong and weak against. This will be particularly useful once draft/ranked matches are available.

Poison Ivy's Healing Wave grants increased Attack Damage and Power Damage to you and nearby allies.

Heal yourself and nearby allies for 50 Health. Further Healing Waves within 30 seconds will have their effectiveness reduced by 50%. You and nearby allies also gain a 10 Attack Damage and 10 Power Damage increase for 5 seconds.

Poison Ivy fires a root that explodes when it reaches the target location or the skill is used again. It deals 50 Power Damage to nearby enemies, and enemies in the center of the area are Knocked Up for 0.8s.

Poison Ivy's target gains a Shield that blocks 55 damage for 3s. Enemies who use Basic Attacks against the Shielded ally lose 20% Move Speed for 1.0s.

Poison Ivy creates a field of poisonous plants that lasts 5s. Enemies in the area lose 30% (+1% per 100 Bonus Will) Move Speed, and are dealt a total of 250 Power Damage over time.

Every 4 skills used causes Poison Ivy to grow a field of flowers at her location. Allies in the area regain 70 Health over 4s. 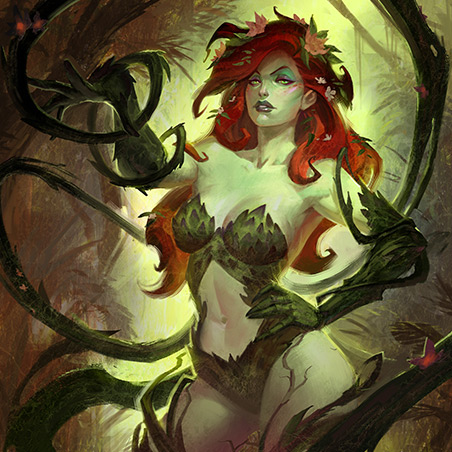 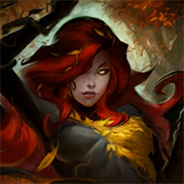 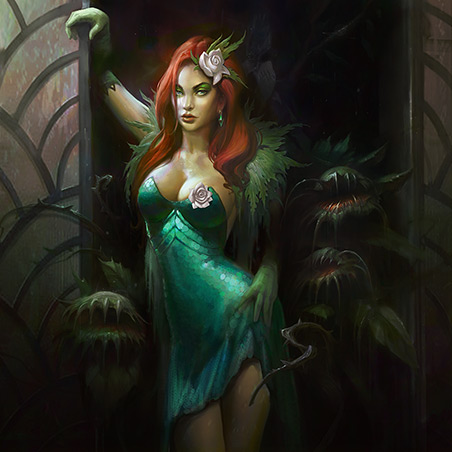 Infused with plant toxins in a dangerous biomedical experiment, Poison Ivy exerts surprising control over plants to dominate the battlefield from afar.

Gifted with a brilliant mind, Biologist Pamela Isley worked with and trusted a biology professor, until he used her as a test subject. The experiment gave her stunning control over plants and weaker minds, but the process broke and warped her own. Valuing plant life and little else, she has become an eco-terrorist willing to put plant life before human life.