Joker 5 votes
We're looking for a Hawkgirl guide worthy of being our Editor's Pick. Want to see your guide here, prominently displayed to every visitor to this page? Go create a guide and show us what you can do!
Default
The below feature is still being tested. Expect bugs and wacky behavior.
Vote for who Hawkgirl is strong and weak against. This will be particularly useful once draft/ranked matches are available.

For the next 4s, you gain 20% Move Speed. During this duration, your Champion gains 0.5s for each Basic Attack while Super Speed is active, up to a maximum of 3s, and may move through Champions.

Soar: Mace Throw will mark and Reveal the Champion it hits, allowing Hawkgirl to activate it again in the next 5s to dash to the target, dealing an additional 30 Attack Damage and Stunning them for 0.2s.

Hawkgirl breaks free from Slowing effects and soars into the air, gaining 15% Move Speed and empowering her next skill use for 5s. Using an Empowered skill will deactivate Soar.

On Champion kill or assist, the cooldown on Soar is reset.

Hawkgirl empowers her next Basic Attack within 5s to deal an additional 40 Attack Damage to the next enemy she hits and Silences the target for 1s.

Hawkgirl Knocks Up the target enemy Champion for 1s and deals 175 Attack Damage. Additionally nearby enemies are Knocked Back and dealt 50 Power Damage. Each enemy Champion struck by Howling Eye grants Hawkgirl a Shield blocking 40 Power Damage for 3s.

Each Basic Attack against any target grants Hawkgirl 4 Power Armor, stacking up to 4 times.

The buff resets if she has not Basic Attacked in 5s.

Fly High with Hawkgirl! (This pun has never been used before) 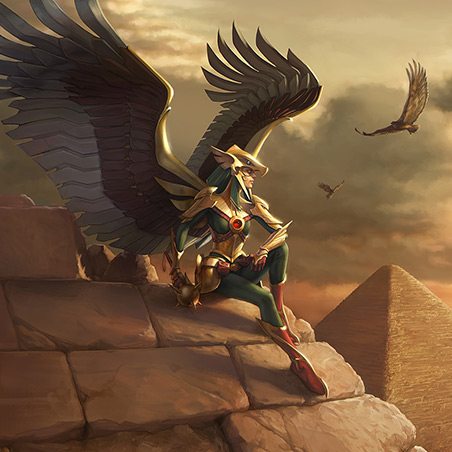 While growing up, Kendra Saunders' father was murdered by a corrupt police officer who had continually harassed their family. She later tried to help people from inside the system and became a police officer herself, but soon felt that she was being held back by the rules and regulations of the job.

When she was on yet another disciplinary suspension for breaking the rules, she encountered Hawkman. The hero told her that she was a reincarnated Egyptian princess and that the two had been both heroes and lovers in their previous lives. She thought him insane and asked to be left alone. Surprised she didn't remember him, he agreed to leave, but insisted she take the Nth mace and flight harness she had used in previous lives. She took the items just to be rid of him. However, as time passed and she came to the realization that a hero could do things a police officer never could. They could work beyond the rules and do more to help people. She decided to put the equipment Hawkman had left to good use and became the heroine, Hawkgirl.

In addition to her Nth metal mace and flight harness, Hawkgirl is a martial arts expert. She is a brutally effective warrior and shows little restraint in battle. She will take down her enemy and makes sure they stay down.