Blue Beetle 2 votes
We're looking for a Wonder Woman guide worthy of being our Editor's Pick. Want to see your guide here, prominently displayed to every visitor to this page? Go create a guide and show us what you can do!
Default
The below feature is still being tested. Expect bugs and wacky behavior.
Vote for who Wonder Woman is strong and weak against. This will be particularly useful once draft/ranked matches are available.

Wonder Woman's Super Strength allows your Champion to pick up and throw Environmental Objects even farther.

Wonder Woman throws her lasso, Stunning the first target it hits for 1s, and then dashes to them to deal 75 Power Damage.

Wonder Woman gains a Shield that blocks 40 damage and lasts for 4s. If she targets an ally or allied camera with Protection, then she will dash to the target and grant it the Shield instead.

If the Shield is broken by damage, Amazonian Prowess immediately gains a charge and the cooldown on all of Wonder Woman's skills is reduced by 2s.

Wonder Woman can spend a charge to sweep her sword and deal 50 Power Damage to all nearby targets. She gains a charge every 14s for a max of 2.

Wonder Woman taunts nearby enemies and channels in place for 2s. While channeling, she gains 50% Attack Armor and 50% Power Armor, deals 60 Power Damage over the duration to enemies in the area, and her Taunted targets are forced to attack her with Basic Attacks.

When Blocking Bracers ends all nearby enemies are dealt 80 Power Damage. 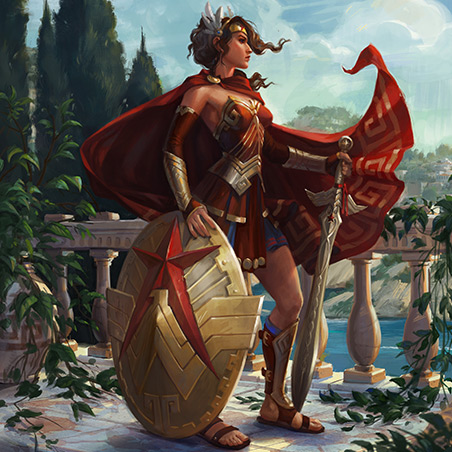 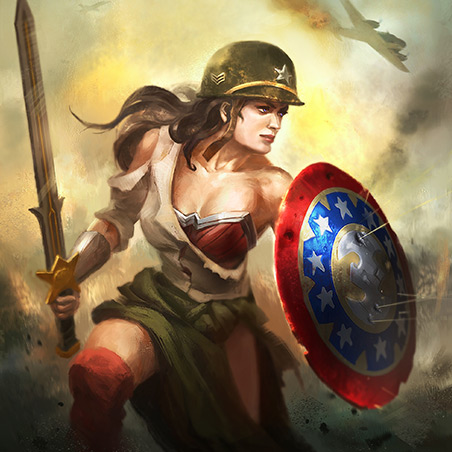 Born of Zeus and Queen Hippolyta of the Amazons, Wonder Woman protects those in need with sword and shield.

The Amazons lived in isolation until pilot Steve Trevor crashed on their island paradise and Diana fought to accompany him back to civilization as Wonder Woman. Expecting a world of peace and prosperity, she instead discovered war and hate, vowing then to enact change. Viewing conflict as an ugly necessity, Diana offers opponents mercy if at all possible.