Mecha Wonder Woman 1 votes
We're looking for a Krypto guide worthy of being our Editor's Pick. Want to see your guide here, prominently displayed to every visitor to this page? Go create a guide and show us what you can do!
Default
The below feature is still being tested. Expect bugs and wacky behavior.
Vote for who Krypto is strong and weak against. This will be particularly useful once draft/ranked matches are available.

Krypto's Healing Wave applies an additional heal over time to those healed.

Krypto tosses his bone to target location, Revealing the area for up to 5s. During this time, Krypto can reactivate the skill to dash to the bone, dealing 65 Power Damage to all enemies he passes through and Slowing these targets by 30% for 3s (+1% per 250 Bonus Will).

Allies can pick up Krypto's bone and throw it twice as far as Krypto can. Krypto is immune to disables while dashing. Krypto can pickup his bone to refresh the Cooldown.

Krypto rushes a fixed distance at targeted ally champion or unit. Krypto and allied champions he passes through gain a Shield that blocks 50 damage for 3s. Krypto can Shield himself without rushing.

Krypto howls, demoralizing nearby enemies, causing them to lose 15% Attack Speed (+1% per 250 Bonus Will) for 5s.

Vigilance: On The Hunt also deals 50 Power Damage to all enemies within the area.

Krypto barks, unleashing a powerful blast of air in an area in front of him, dealing 150 Power Damage to all enemies and pulling all those hit towards the center of the blast.

After Dashing with Fetch! Krypto's next Basic Attack or Skill within 3s gains a bonus. 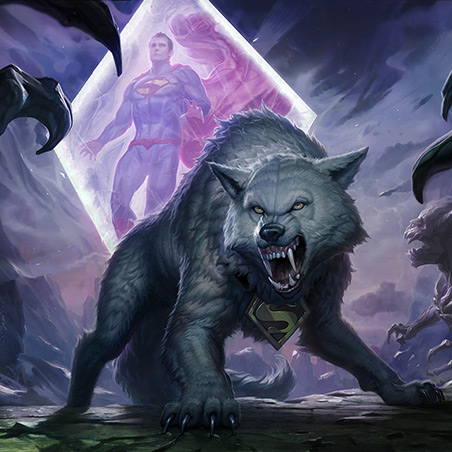 Although from the planet Krypton, Krypto's planet of origin is not the only thing that makes him truly unique. Soon after the birth of his son, Jor-El genetically altered a Kryptonian hound to increase its intelligence and loyalty so that it would serve as a companion and guardian for his son. Later, as the planet Krypton neared its destruction, Jor-El tried to save his family by escaping into the Phantom Zone. The prisoners trapped within the Zone saw this as an opportunity to escape.

Krypto fiercely defended his family and threw himself at the Phantom Zone portal, driving the prisoners back. Unfortunately, his attack damaged the portal and he was trapped within the Zone. As Krypton entered its death throes, the desperate Jor-El was only able to save his son Kal-El, whom he sent to Earth. Thanks to the unusual qualities of the Phantom Zone, Krypto was able to follow Kal-El to Earth and kept watch over him there. When the prisoners of the Zone once again tried to escape, Krypto came to Kal-El's aid. This time, though, Kal-El was able to save Krypto from the Phantom Zone.

Now finally reunited with his beloved master, Krypto fights alongside Superman as he protects the Earth.