Nightmare Superman 1 votes
We're looking for a Sinestro guide worthy of being our Editor's Pick. Want to see your guide here, prominently displayed to every visitor to this page? Go create a guide and show us what you can do!
Default
The below feature is still being tested. Expect bugs and wacky behavior.
Vote for who Sinestro is strong and weak against. This will be particularly useful once draft/ranked matches are available.

Sinestro hurls a saw-blade, dealing 60 Power Damage to the first enemy it hits.

If the target has Yellow Impurity they take additional Power Damage equal to 4.0% of their Missing Health. This damage bonus caps at 320 Power Damage against drones/creatures.

Sinestro swings a scythe, dealing 50 Power Damage to enemies in a cone.

If the target has Yellow Impurity, they will also be Silenced for 1.0s.

Sinestro dashes to a location, dealing 55 Power Damage to enemies in the area. Killing an enemy resets this skill's cooldown and grants Will equal to half its cost.

If the target has Yellow Impurity, they are dealt an additional 30 Power Damage.

Sinestro launches Parallax towards a location. On arrival, he inhabits the location for 1s. Enemies in the area are Feared for 0.5s, dealt 75 Power Damage, and marked with Yellow Impurity.

If Parallax hits an enemy champion during flight, he will attach to that champion, and create an area of Fear around the target instead. The target is Stunned and takes 175 Power Damage over 1s. 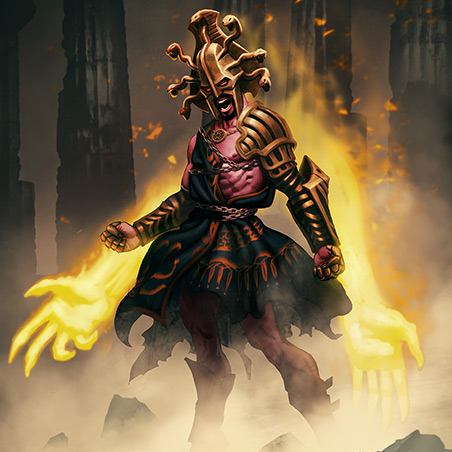 Thaal Sinestro was once a Green Lantern and close friend of his fellow Lantern, Abin Sur. After the monster Atrocitus murdered Abin, Sinestro became consumed with maintaining order in his sector, no matter the cost. Eventually, his sector became a police state, with the Green Lantern symbol being seen as a symbol of fear and oppression. When Sinestro's actions were uncovered by Hal Jordan, Sinestro was put on trial by the Guardians. During his trial, he told the Guardians they were fools to trust the power of Will to maintain order. "Order could only come through fear."

Found guilty, Sinestro was banished to the antimatter universe. There he met the Weaponers, who forged for him a new power ring, a yellow one powered by fear. Sinestro swore to use this ring to bring order to the universe and to gain revenge against the Guardians and Jordan. The powers of Sinestro s ring are nearly identical to a Green Lantern ring, except the constructs are yellow in color. However, due to the ring being powered by fear, Sinestro has the ability to tap into and manifest the fears of his enemies.